Being a business owner doesn’t necessarily mean being an entrepreneur. If that was the case we wouldn’t need a new and such a complicated word. If you Google “entrepreneur” it will tell you that an entrepreneur is a person who sets up a business or businesses, taking on financial risks in the hope of profit. However, economists and some of the most successful entrepreneurs would disagree. According to economist Joseph Alois Schumpeter (1883-1950), entrepreneurs are not necessarily motivated by profit but regard it as a standard for measuring achievement or success. Peter Drucker who is well known as the father of modern management enriches the definition by emphasizing “change” and “opportunity”. He defines the entrepreneur as “someone who always searches for change, responds to it, and exploits it as an opportunity.”

The word entrepreneur itself originates from the French word “entreprendre” meaning “to undertake”.

Having met thousands of entrepreneurs from many different countries and cultures and being one myself I came up with the Entrepreneurship Mix 8P’s. And if the word itself seemed complicated back then when I was studying the course “Entrepreneurship” for my exams, today I can say that being an entrepreneur is way more complicated than that.

So here are the eight P’s that I believe set successful entrepreneurs apart. The magic is formed by the intersection of most or even better all of the traits so the order is irrelevant. 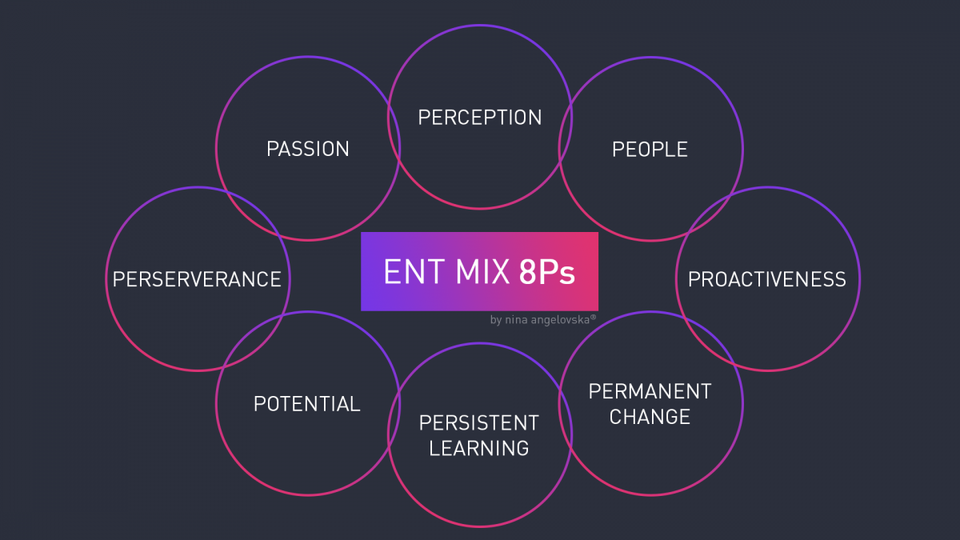 The eight P’s of entrepreneurshipNINA ANGELOVSKA

Passion is the key source of energy, motivation and hard work. It is the driving force for every entrepreneur. It is what fuels the moving-mountains attitude and belief that anything can be done. It is what defines the famous “WHY” of the Golden Circle of Simon Sinek. If you are passionate about something you thrive to succeed, you love what you do so much that you want to do more of it. And the more of it you do the greater the chances for succeeding, thus getting better than the rest in your area.  In his book Talk Like Ted, Carmine Gallo states that passion is the key to mastering a skill. After analyzing hundreds of great speakers and presenters he claims that passion is the one thing in common for all. To use his phrase, which I love, I believe that successful entrepreneurs know “what makes their heart sing”

The story of Bata is the ideal example of this key trait. Bata shops can be found all over Africa, even in its most remote parts. The story behind is that by the end of the 19th century, Africa was opening up its market. Many shoe manufacturers sent their representatives to Africa to see if there was any business opportunity in this emerging market. The majority of them returned home, saying, “Nobody in Africa wears shoes. So, there isn’t any market for our shoes there.” All except for the Bata sales team who reported enthusiastically, “Nobody in Africa wears shoes! So, there’s an enormous market for our shoes in Africa!” The market conditions were the same for everyone and yet it was a matter of perception of the opportunity.

It was the same for me when I was launching the first deal platform in Macedonia at a time when less than 1% of the population was shopping online and e-commerce barely existed (no legal framework, lack of trust, a small share of people with payment cards etc.) Most of my friends with whom I shared the idea though that the market is not ready and the timing is not right and yet my company (Grouper.mk) became a success shortly after launching and today is known as the game-changer of e-commerce in Macedonia.

True entrepreneurs can see opportunities where others can’t or don’t.

Research shows that the brain capacity of an average person is far greater than its usage. The most successful entrepreneurs are willing to sacrifice hours of sleep and skip social activities with friends in order to invest in their potential. They don’t waste countless hours scrolling on social media or gossip, they feed their brain with quality content, they surround themselves with successful people. They are always curious about new things. And while there are differences in the potential that each of us possesses the good news is that our brains can be trained. The mind is what the mind is fed and good entrepreneurs feed and train their brains well.

But before this kind of “on purpose” training happens, it is worth mentioning that it all begins with our parents. First with their DNA (which is not in their control) and second with their home growing and teaching (for which they are fully responsible). According to one study by Rauch Foundation 85% of the brain develops until the age of 5. Therefore the environment of a child’s earliest years can have effects that last a lifetime. Therefore governments and entrepreneurship development programs that seek to create more and more entrepreneurs in this world should start by teaching parents how to raise entrepreneurs or people with an entrepreneurial mindset who will use their potential and thrive, instead of pushing accelerators and incubators to find or create entrepreneurs during later stages when brain elasticity is lower.

When talking about people in companies I always like to quote Zig Ziglar – ‘You don’t build a business. You build people, and people build the business’. People make good or bad decisions. Every single business depends on people (regardless of industry). That marketing manager that made that lousy decision to approve those ugly billboard designs, that salesman that negotiated the best deal that broke the sales records, that customer care person that impacted your perception about a particular brand. Every single thing in life depends on people. The success of a company, of a business unit, of a whole country, depends on the people. Even when we travel and explore new cities our opinion about that city is not solely affected by the beautiful nature or the architecture but people living there play maybe the most significant role – their energy, culture, attitude, hospitality influence our impressions.

Every entrepreneur, leader or manager with a vision needs a team that supports its vision to make it a reality. It is up to the ability of entrepreneurs to find the right people, to communicate the vision, to attract talent, to invest in building and sustaining their skills set, their energy, attitude and positivity.

Since I was a little girl, my mother taught me to strive for knowledge and be the best at whatever I do. She would say “You can have houses, cars, and wealth but one day it can all be gone. The world is not always righteous. The only thing that no one can take away from you is your knowledge. If you have the ability to acquire knowledge, to be a fast learner you will always be able to generate new income and build new things.”

And today, to add to my mother’s lesson I would say that another thing that no one can take away from us is our passion. What we have in our minds (knowledge) and what we have in our hearts (passion) makes us as unique as our DNA.

Persistent learning means learning anytime, anywhere from everyone. Outstanding entrepreneurs are able to absorb valuable information and knowledge for everyone like sponges. Being a fast learner is a must for entrepreneurs in today’s faster than ever changing world.

Everybody wants change but nobody wants to change. The resistance to change is in our human nature but the faster we train ourselves to accept and adapt to change the faster we will become better. Successful entrepreneurs are flexible, they can adapt and change quickly. The ability to perceive change as a positive thing, to react and adapt to it is one of the most powerful skills. As Charles Darwin said “It is not the strongest of the species that survives, nor the most intelligent that survives. It is the one that is most adaptable to change.” Or as Michael Jackson says “I am starting with the man in the mirror and I am asking him to change his way… If you wanna make the world a better place take a look at yourself and make the change.”

Imagine you have departed towards your very desired travel destination. You have planned and fantasized about that magnificent place for so long. You start your journey and suddenly there is a big rock standing on your way. So what do you do? If you have some strong friends you might call them to help you push the rock away. If you don’t have any strong friends your solution might be to climb it. But you don’t know how to climb. So you take climbing lessons and come back with your new skill and climb that rock and continue the journey. It is the same in business. The “rock” symbolizes any kind of obstacle you might face (it be a financial issue, can be a marketing issue, you name it). The “strong friends” are the contacts, networks and people you have in life that can help you out. The “climbing lessons” is any new skill that you don’t know at the time or are not interested in but you go and learn it because that is your only way to continue towards your goal.

During the past eight years of extensive hard-work, overcoming barriers, removing rocks, dealing with all sorts of situations, making decisions, working with different characters and meeting people from all over the globe I learned a lot. In fact today I am grateful for all the struggles, for all those ‘rocks’ on my way, for every problem solved (that seemed unsolvable at the moment) because it made me more flexible, adaptable, resourceful and more knowledgeable. It simply helped me gain a competitive advantage and be a better and stronger person.

Nothing in life comes easy (at least success and good things). If you have a mission, if you have a passion it will not be easy. The road will be bumpy, the will be rocks on the way, some of them will be light, some will be super heavy but if there aren’t any rocks one thing is sure – you are not on the right road. It won’t be easy and we should ask for easy because that way no one will be able to copy what we create.

Most people only do what they are asked, meeting the very minimal requirements and expectations (or even worse some under deliver). They need to be delegated and even micro-managed. Successful entrepreneurs initiate – they see the bigger picture and foresee the circumstances. They are proactive instead of reactive, they play offense, instead of defense. And this is what makes them hard to replace in any given environment.